Cannot get a forge server to boot using this method. Nothing happens when trying to launch it in the webui and i don’t get any logs in the minecraft server itself so its not starting.

forge 1614 needs java 8 primarily so i know its not detecting the flag not really sure if i set it correctly but its the right directory and the bin is at that location.

is there a MineOS log i can check or something else?

Try running that java binary with -jar “pathtoyourjar”
from the cli and see what the output is
Whatever works from cli you should be able to paste in the java_binary field (in the server.config) and that should work.

Nothing in the log it was all old data because i was testing a vanilla server at first. I deleted the mineos.log and now its not even getting far enough to create one i guess. So nothing is actually happening.

I assume this is the right way to run the jar file?

setting it to execute makes no difference

you’re using that Java binary to run your minecraft jar

idk enough but its missing some class files?

That is all you’re typing into the console, correct?
if so you may have the wrong java version or you’re running the wrong jar or something.
If you could screenshot your steps that could be useful to debug.
It’s also possible you require the JDK version and not the JRE version (your’s appears to be the JRE version as denoted by the -jre in the path)

Its the same binary i am using to launch/play the game i did re download it though for the server just because i think my client is using an older iteration. So in theory it should be the right one maybe i will just try some alternatives. I will try the jdk version of it.

If you can screenshot some of the details that would help. Some mods are also client side only.

Not sure what you want to see but this is the stuff i think is relevant. The pack is also Gregtech new horizons so its point and click go. The modpack is ready to run as is by the pack devs. 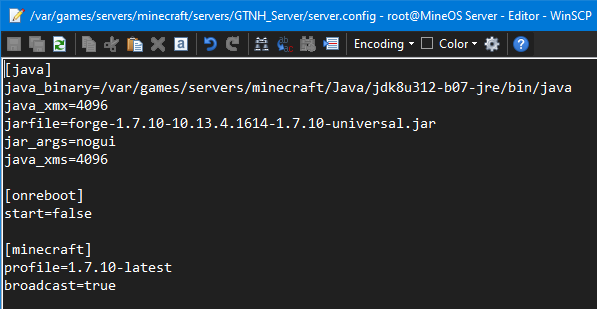 better, what user did you use to extract the java folder?
Can you show the permissions for that folder and the minecraft files?

its all done by root well i extracted on my main pc using 7zip but ftp’d it over using root.

normally the minecraft would be owned by mc or another user

yeah that would explain it then because in the webui it says owner is mc for the server files and in the file tree when looking at the ftp client etc and the java directory onwards is owned by root.

so the server can only run the server as mc? basically? so anything to do with root for example i wouldn’t be able to access when running from the webui? meaning i just upload that java stuff as mc instead?