Unable to view server via LAN

any help would be appreciated

My initial guess is that MineOS isn’t getting a DHCP address or you need to setup for a static IP.

Thank you for your response. im using Truenas MineOS plugin, the network configuration is currently setup to vnet however there is a switch to change it to DHCP so ill try that and report back.

for a static IP, would that IP need to be for my machine hosting VM for mineos or would the static IP be for the IPv4 of the specific VM?

The static IP would be the network details for the MineOS build, but I’m not familiar TrueNAS or others of the like.

With the TrueNAS / FreeNAS plugin, you need to make sure you didn’t choose “NAT” - instead choose “DHCP” when you set up the plugin / jail.

Choosing DHCP will put the MineOS server on the same network as your regular LAN, with all other computers. Choosing NAT will sort of put it in on its own little network, with the TrueNAS server acting as a gateway. So, you could then in theory enter the IP of your TrueNAS server, but then you would need to do additional port forwarding on the TrueNAS ui. Overall it’s less effort to just choose DHCP when setting up the plugin.

If you want to change it from NAT to DHCP without deleting and re-creating the whole thing, just stop the plugin, then edit it and change the tick-box. 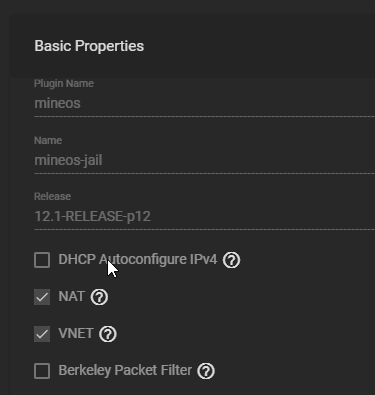