I’m probably doing something stupid but I’m not seeing so I apologize in advance.

I grabbed the mineos jessie ISO from the wiki and tried to install it clean both into a unRAID VM and a WIndows Hyper-V VM. In both instances neither system recognized the ISO as a bootable device and went no further than the initial power on screen.

Checking the jessie ISO (And the tkl ISO to confirm I’m not goofing up the download) I only see two directories “casper” and “isolinux” which looks like it should work, but I do not see any root files that would allow the ISO to actually bootable.

In addition to casper and isolinux, you might also see [BOOT].

I don’t believe the directory is actually called [BOOT], but just that the ISO viewer I’m using designated it that way. In Windows 10 Mount, as an example, it is entirely absent.

Inside is (according to my viewer 7zip) Boot-NoEmul.img which would constitute the bootable portion of the CD filesystem.

The ISO is definitely a standalone install, but you’re probably not doing anything stupid; we’re just not sure why your unRAID VM or Hyper-V is not booting it.

Here’s what you should expect to see: 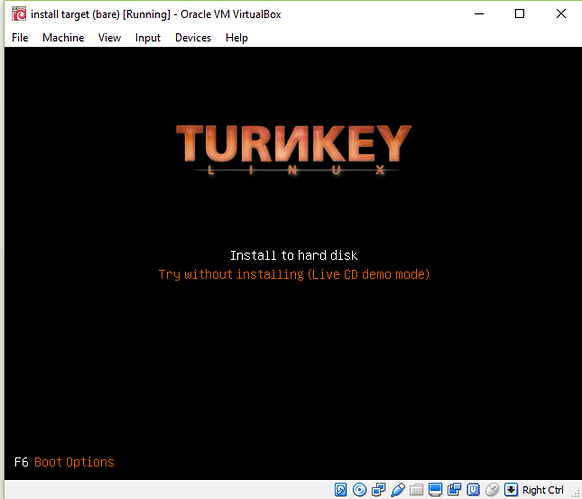 Anybody else here with experience with those two VM/hypervisor softwares have any clues for this non-boot?

I have been attempting to use the turnkey iso to setup a VM on my FreeNAS server. It will not boot to it either.

I have also noticed the [BOOT] folder missing in windows, but visible in 7zip with the .img file in it.

FreeNAS only seems to have decent support for UEFI VM’s… it looks like this iso needs to be updated to make it UEFI compatible, I would imagine that would fix most of the issues with a lot of these hypervisors.

Edit: Got this working. For anyone else: Open VM template for Linux/Debian, and change BIOS type to SeaBIOS when creating the VM. All other settings can be default. This will boot successfully.

I’m having the same issue. unRAID VM. Can’t see the ISO at all. I’ve tried earlier BIOS versions for the VM, but no change. I’ve tried MJ36’s beginner ISO (much as I don’t really need/want a GUI), and while that boots no problem, the installer crashes right at the end, and doesn’t successfully generate a bug report.

Did anyone running unRAID successfully get this installed?
(I know there’s a Docker container, I have that running fine, but I’m trying to install this for troubleshooting/testing)

I’ve tried MJ36’s beginner ISO (much as I don’t really need/want a GUI), and while that boots no problem, the installer crashes right at the end

Addressing your issues in order:

To make the system boot up into commandline only mode without the desktop environment or window manager, you should be able to just use/run “ systemctl set-default multi-user.target ” as root .

To revert (making the system boot up back with the desktop environment and window manager again), you should be able to just use/run “ systemctl set-default graphical.target ” as root .

Regarding the last part about legacy/BIOS aka “compatibility” mode and not EFI/UEFI, you are booting in EFI/UEFI mode (which does work) then attempting to install with/in/from EFI/UEFI mode (which does not work and is an upstream issue with the OS that it is based upon or was made/created from) which then results in the installer crashing at/towards the very end, because it does not know what to do or how to deal with/handle the EFI/UEFI boot configuration stuff (despite it’s live installer system being bootable and you reaching the installer from within that mode).

Everything that you needed was already documented in the thread (that’s where these quotes all came from), or just ask. Anyways if you really need EFI/UEFI mode over legacy/BIOS you can always use/try Ubuntu Server or try the JM36 image again in that mode except at the end once it crashes start up/try out “boot-repair” afterwards and see if you’re able to fix or “complete” the installation afterwards using/through that since really the only thing missing is the boot configuration when the installer crashes in that mode. I personally have not tried it but if/when I do if it works I’ll create a new revision with that already done.