(and yes npm install was ran

Since doing so the webui freezes up and does not load all the servers that should be there, It wont let me make any setting changes , the profiles do not show up.

the 1 server that does show up, the setting wont change, and it does not show any available profiles.

I have looked thru the logs, and nothing stands out to me… 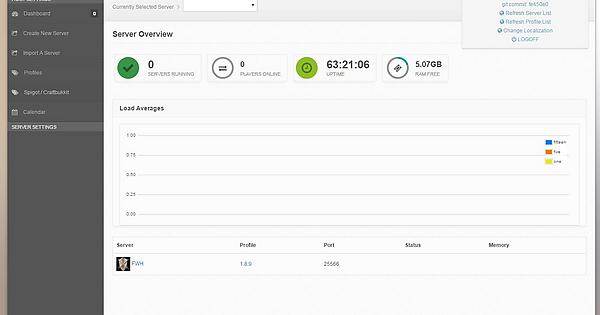 Logs Can be found here:

Dropbox is a free service that lets you bring your photos, docs, and videos anywhere and share them easily. Never email yourself a file again!

Refreshed page, and now every time i do i have to log back in.

I am at a loss at this point, i am trying to avoid a complete reinstall …

Can you verify that within your minecraft data files that there are no errant directories existing from partially-deleted servers?

In this example, see that all the servers that exist in /servers also exist in /backup and /archive

None that i can find. here is my directories

We have figured out the issue, well … what in a sense caused it. It was a MC Server Mod Dynmap …

It was about Space … When Dynmap was added and the maps were rendered m it generated 15Gb of files for the maps. I think MineOS was hanging up trying to load up that server and causing the ui to hang …

Just wanted you to know that it was a space issue …

I removed the mod for now, then did a full reboot of the host, and both servers cam right up with no problems.

I think we can close the ticket. Unless you have any questions.

Can you let me know what the name of the directory that all these renderings came into?

This issue came up before and I thought I remedied it (by making sure MineOS ignored those huge directories), but if you’re still having it, that’s another directory I need to add to the “ignore” list.

No, the directory where all the dynmap files are being put.

on my server it was

and digging in deeper the big dir was

/var/games/minecraft/servers/MineSomeMore/dynmap/web (this folder was 15.4gb)

*/dynmap/web would probably be a better line to use for the ignore list, being that the dynmap directory locations all differ depending on the version and server type (for Bukkit/CraftBukkit/Spigot/PaperSpigot, it would be */plugins/dynmap/web as I last remember it, and for Forge, and other types, it may be located somewhere else like */dynmap/web. Previously, using the Sqlite DB file was the work around for the problem before the ignore list (which actually works better than the way dynmap renders it by default).

We have since switched over to using MySQL for the dynmap, that reduced the directory size by 700mb. UI Still a little slow loading, 15-30 delay from the time i login before i can see all the servers … But i believe the cause of that is the fact of a very large world we are running … The world folder is almost 1.2GB …

The Delay doesn’t bother me much …