i have an ubuntu server 17.04 installer and i want to know if there is a non script way to install MineOS to it and is there a way to access the server files easily with something like filezilla? i wish to know before i install.

also when using MineOS-on-Ubuntu, how do i update java to java 8?

You can run all the commands from the script individually, like the wiki walks you through. Am I misunderstanding your request?

There’s also mineos via Docker (and mineos as a plugin to FreeNAS). But if you’re asking if there’s an apt install mineos, unfortunately no.

how do i update java to java 8?

sry, im a noob at this. anyway, my request is is there a .run file or something similar so i dont have to type out the script. my dad says ubuntu is best soo idk… also, whats FreeNAS?

my request is is there a .run file

Would such a file do anything different than running the one script you have to run to install MineOS from the wiki?

i want to have everything on file so i can run everything from the same place. (im currently on a win 10 laptop and i am placing files on a disk to run quickly)

also, what about the file thing?

and is ubuntu server or desktop better for this? (setting up on an old 8gb ram computer with 5 HDD’s)

Alright, I understand you’re new to Linux but you’ll need to work with me a bit.

The wiki does a very specific thing: it gives you the necessary instructions and tells you what each line does. What about the wiki’s instructions aren’t good for you?

sorry, it just looks too complicated for me. im looking at it w/ my dad.
what about the other stuff?

There are much more simple ways to get a simple vanilla Minecraft server up and running, but I’d say when you try installing Server Operating Systems (such as Ubuntu), you’re usually treading into waters that involve some real dedication to following instructions on stuff you don’t yet know/understand well.

If you don’t feel ready for it just yet, the intermediary might instead be to install the “turnkey” solution–MineOS Turnkey. It’s the distro I distribute specifically so the admin has nothing more to do than go through the install steps (steps you’ve already gone through for Ubuntu 17).

At this point you have to answer a simple question for yourself:

How many unfamiliar tasks am I willing to learn in order to set up a Minecraft server?

i am already aware of the simple ways, including turnkey, but my dad says ubuntu is best, and i dont want JUST mineos (i want mineos in the first place because i can 1:access it anywhere, 2: my freinds can accsess it anywhere, 3: its an easy panel. the only thing im worried about is manual access to the servers’ files) i would like to add mysql database to it for certain plugins (i can only use the one computer) and linux is very light on resourses witch helps w/ minecraft. as for the learning curve? ill work with my dad and/or watch crap-tonnes of youtube vids XD. tonnes of vids is accually how i really learned how to minecraft well (in general)

note, my dad was actually a programmer and has used linux before so he and i will work together on this.

just for clarification, i want mineos for its manageability and automation

im going to be using ubuntu server. i wish to know if mineos will run correctly on it just to set my mind to rest. want to avoid as many errors as possible, right?

sorry for repetitiveness… also? thanks for your help so far.

also, is there a way to make these commands into a file to run on its own?
i want to have all setup ready before i go back to the computer itself to save time

is there a .run file or something similar so i dont have to type out the script.

Look up puTTy, it’s a terminal client that allows you to connect to your Ubuntu server from your desktop. It being a desktop app, you can copy/paste the commands from the wiki to the command prompt–you needn’t just type them out (if that’s your concern).

Thats… actually something that might help in general as well… I’ll look into it, Thanks!

how do i use it and witch one should i download?

There are numerous ways to deploy the MineOS WebUI:

Copied from this page in the wiki; go there to see “the documentation below”.

how do i use it and witch one should i download?

You’re likely going to need/want the x64 (64-bit) version however in the event that that version doesn’t work then it means your OS and/or platform is x86 (32-bit) so you’d need that version instead.

Now, how you go about using it may or may not require additional steps, depending on how you installed Ubuntu Server (what options you chose during installation, etc) but you’re going to have to find out the IP address of the server, which can be done from the server itself using command ifconfig or in some cases you may be able to just use the hostname of the server to connect to it. Examples below:

Where “{hostname}” is the hostname.

Ignore lo as that’s local loopback. What you’re gonna wanna go for is eth0 which will likely not be what shows up for you (mine shows something other than eth0 and yours might too; for this example I modified it’s output with an example IP and MAC as well as showing eth0) but anyways in this example the interface is eth0 and the IP address is 192.168.192.168 which is shown where it says “inet addr:”. 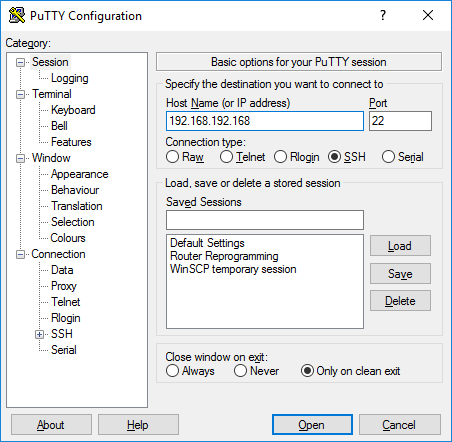 Either the “inet addr” goes or the “{hostname}” does. Whether “hostname” works or doesn’t however depends on your networking configuration and we won’t go there.

If you get the “connection refused” error then you’re going to need to install OpenSSH on the server which would allow you to use both PuTTY as well as WinSCP or FileZilla. In the event that you do need to install it, you may do so using this command: “sudo apt-get install openssh-server” then try again afterwards.

thanks! ill look into it when we go in a bit