Hello, I’m fairly new to MineOS and I’m running it off a FreeNAS server.
I was able to install the latest Forge for Minecraft 1.11, and get other players connected to my server. But once I started adding mods to the server I got errors saying some mods required Java 8 to run.

But even then my server returns the error “mods require java 8”
Am I missing something simple here or am I doing the whole thing wrong?

i don’t think it did what you thought it did. and i am not sure java 8 is your actual problem anyway (looking at FreeNAS with suspicion), but you can try this:

from the MineOS console logged in as ‘root’ you can please try exactly, not one more or less number, letter, space or punctuation mark. exactly line by line:

please let us know if it helps or any further error messages you get.

looking at FreeNAS with suspicion

I think these lines were meant to be used with a Debian based system, not a BSD-based one, though.

I even ran “java -version”

Let’s check out which path MineOS is deciding to use.

Drop into your jail as the user from the webui and try out the following:

This should return the path of the first java binary it finds; whatever it finds is 100% what MineOS is invoking, so I’m guessing that it’s finding a Java 7 binary, and your Java8 binary is not first in $PATH. Confirm?

Hey guys, thank you so much for helping me out.
Unfortunately, I tried both of your advice and neither seemed to work

I tried using tNt’s commands, line by line, and it returned an error saying no such file or directory. Checked the files through FTP and found that there is no /apt/ directory (although the command was recognized). Also tried the apt-get/apt-key commands and it wasn’t recognized.

I tried connecting to the mineos jail through PuTTY and the FreeNAS WebUI shell and both dropped me in as root.
For PuTTY I had to sudo into it while logged as mcserver because mcserver didn’t have permission to use jexec, yet it switched to root user once I dropped in: 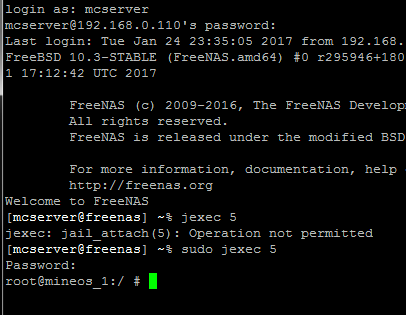 Then it appears that you’re running into an issue introduced by FreeNAS (the plugin) rather than MineOS.

FreeNAS isn’t something I’ve released, so I’m not altogether too familiar with where it puts things. Java going in /usr/local/openjdk8/ is an example, but more prominently, I don’t know where your MineOS scripts are, which are a different directory than your world files /var/games/minecraft).

Perhaps the files are in /usr/local/games/minecraft? At any rate, if node, nodejs don’t bring up the node program, there’s another issue of FreeNAS’ conventions just something I’m not familiar with. One other thing, are you doing this in the jail or the host? The host probably doesn’t have these files.

Finding MineOS’ scripts is task one. In all of my tutorials, they are very clearly put in /usr/games/minecraft or in the case of self-installed atop BSD, /usr/local/games/minecraft. Since FreeNAS works on a plugin system, it very well could be choosing neither of the above, but that makes it no less important to know where FreeNAS (as a plugin system) puts it.

That said, node or nodejs would just help confirm the path; it’s not necessary to know, but probably pretty unambiguously helpful in figuring out what’s going wrong.

All hope is not lost, and that’s not to say that MineOS and Java 8 don’t work together (they do), but the problem we have in front of us is a barrier of knowledge with FreeNAS and its conventions.

Any of the following options are still valid, but whether you should pursue them is up to your level of familiarity; I’m guessing you’re pretty new to this stuff though, am I right?

option 1) _as the user from the webui, at the terminal, type which java. Determine if this locates your appropriate Java 8. If not, you need to adjust your $PATH.

option 2) locate the java that is being invoked. If it’s a symlink, redirect that symlink to the java you know already exists. Looks like you already located this. It’s possible to have /usr/pbi/mineos-amd64/openjdk7/ just symlink (roughly) to /usr/local/openjdk8/, but this is … potentially dangerous.

It could very well work, but FreeNAS will see a different Java than it expects (even if your Forge mods then work), so it could cause issues with the packaging system. Also, the symlink has to be from the binary to the binary, not just the paths, so it’s likely to look more like /usr/local/openjdk8/bin/java…but I also couldn’t tell you for certain because I don’t know precisely what’s on your machine and how it was installed by the packaging system. So this is the most likely easy way to get it working, but it’s also the most error-prone option. So…

option 3) install MineOS on a BSD install that isn’t FreeNAS. You’ll have both the control of where files are put (and the wealth of knowledge of other people on this site to help you)

Ah, I see.
Thank you very much for helping me out and trying to troubleshoot. To me it seems like my best option for now is moving to a different OS that works out of the box with MineOS and has a lot of documentation for any other errors I might run into in the future, as I also wanted to run a home media server and cloud storage stuff through the OS. I’ll give FreeNAS another try later. Researching it a bit I think I’m going to try using Ubuntu Server.
And yeah, you’re correct I am pretty new to this stuff. My forte is more on the hardware side… but I’m learning

Now, I’ve tried looking into Turnkey but can’t seem to find a straight answer. Is it just pre-packaged tools like FreeNAS’s “Plugins” system but for Linux systems?

I think these lines were meant to be used with a Debian based system, not a BSD-based one, though.

in addition, ubuntu1 was not supposed to have the ‘1’ either. so all around my bad.

i would suggest VMware or some other virtual machine as a base for your server and you would be able to achieve your goals of; [quote=“SpoonlessTaco, post:6, topic:1717”]
as I also wanted to run a home media server and cloud storage stuff through the OS
[/quote]

Now, I’ve tried looking into Turnkey but can’t seem to find a straight answer. Is it just pre-packaged tools like FreeNAS’s “Plugins” system but for Linux systems?

Sales pitch about MineOS Turnkey on the wiki.

TL;DR the MineOS webui is a collection of node scripts, which can be installed on any *nix system.
MineOS Turnkey is that collection of scripts bundled with Java and MySQL on Debian. For all intents and purposes, installing Debian/Ubuntu and installing the scripts atop that will give you the same functional system.