Gamemode and others not "sticking"

I’ve made a couple changes in the server.properties:

but when people keep joinging the server, it keeps coming up as hard hard, or hardcore or something. I /op everyone, so they can change the stuff on their own, but the default settings there in there seem to be incorrect.

Any ideas on how to make these changes default in the world I made? thanks!!

Are you restarting the server after making the changes in the webui?

One thing to note is that the webui only changes the on-disk files, e.g., server.properties. Minecraft, on the other hand, only reads these files on server launch.

Restarting the server should make these changes take effect.

I believe it’s possible to also instead change these attributes immediately without reboot by sending them to the console, which will also update the on-disk files, but restarting should pretty much 100% take care of the persistence of these changes.

“It is normally impossible to toggle Hardcore mode once the world has been created”
But there is no option on the mineos Create New Server screen initial configuration screen. 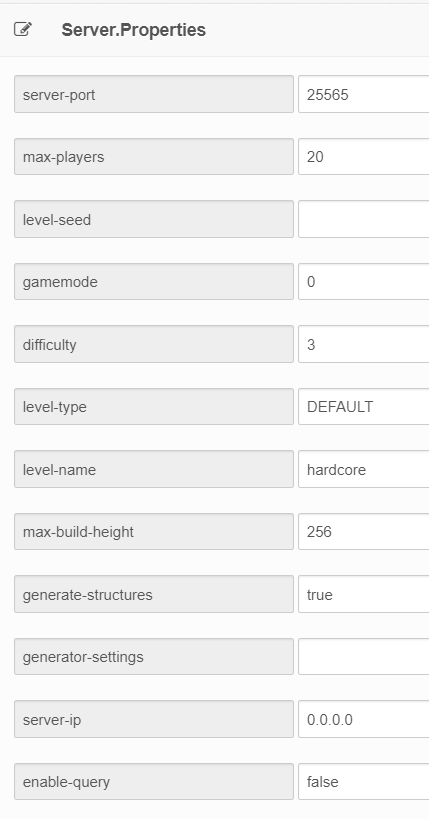 Don’t even get the option to set the hardcore tag before start.

The moment you create a new server (for me I “copy spigot to new server”), you have to accept the EULA. Instead of hitting start there, click off that screen. That will get you to a longer list of server variables, before the first run.