Need some help here. I am relativingly new to the MineOS world but not to Linux and such. In a nutshell I am trying to setup a MineOS server running the Forge 1.12.2 version so my kids can use the SCP mod to create a world. I can’t use the latest 1.13 versions as SCP only goes up to 1.12.2. When I follow the instructions I have found on here to setup the server it creates just fine. I change the profile to 1.12.2-recommended and hit start. It downloads and extracts the forge files. I change the runable jar to forge-1.12.2-universal.jar and when I press the Start button, nothing happens. Below is a screen shot of my settings. Am I missing anything? 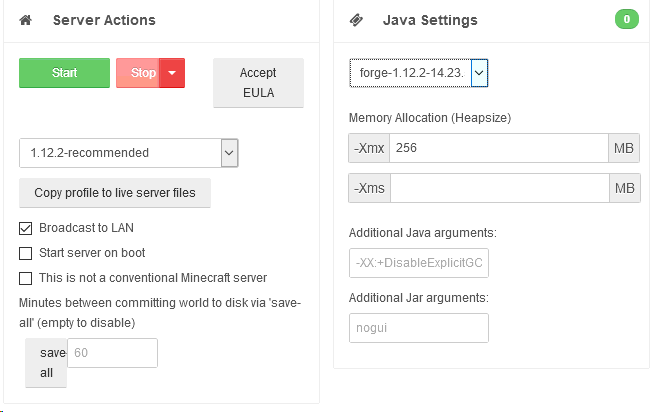 First thing is are you using the official MineOS distro (and if so which one) or another distro with MineOS installed upon it (which one)? Second would be approximately how long ago or if you’ve tried updating the web ui? Third would also be Minecraft server logs if any in/under /var/games/minecraft/servers/{server}/logs incase that has anything useful. You may also want to bump up that xmx value a bit depending upon your system hardware configuration and any other servers you might be running. And I guess fifth would be whether Java is installed and if so which one/version being that Oracle Java 8 or OpenJDK8 is required for I believe Minecraft 12 and up.

@JayMontana36 thanks for your response. Let me try to address your questions one at a time.

I am running MineOS from the GIT offical GIT repository on CentOS7. I installed it following the located on the offical wiki here https://minecraft.codeemo.com/mineoswiki/index.php?title=MineOS-node_(yum).

Yes, I followed the update directions from the Wiki and have run the update_webui.sh shell program just the other day.

The logs directory under my created server is shown below. The logs don’t show anything at all when I click on the Start button. It is as if the server doesn’t try to start at all. The logs show when I initialized the server and it extracted the forge universal from the install.jar but that is it. Screen shot below.

I am running OpenJDK 11.0.2+7 which is what gets installed by default on CentOS 7 as shown below.

The logs don’t show anything at all when I click on the Start button. It is as if the server doesn’t try to start at all.

Well, my guess/assumption now is that your forge universal jar file isn’t actually a/the Minecraft server executable jar file hence there being no log files when it is run. The reasoning behind this exclamation/claim is/has to be

Wow I didn’t even see that fully but yeah that would about sum it up mostly if not completely.

I am running OpenJDK 11.0.2+7 which is what gets installed by default on CentOS 7 as shown below.

Well, that might work, though it is I believe “experimental” or “unstable” or whatever they might call it, but I guess if or as long as it works then it does. I’m pretty sure you can or should be able to specify a general version or “branch” rather than just only the latest.

Anyways, the fastest/easiest fix probably likely would be for you to copy both the Minecraft server jar and the forge universal jar to your PC and then run the forge universal jar of it is runnable (if not then you’ll have to patch it in manually just like the old times a few years ago or grab an installer version/jar) and select server, then you should end up with a forge specific Minecraft server jar to run which you can then copy back to the server and run. The web ui may also have a forge option/profile but I’ve not checked or verified how it worked/what it did or does.

@JayMontana36 looks like you were right with the java version. I uninstalled 11 and installed 1.8 with the commands below and set the server to use the downloaded forge 1.12.2 universal jar file and it started right up! Looks like we need to edit the Wiki for the CentOS install to check the java version. I am a little concerned over the 666 memory foot print though. 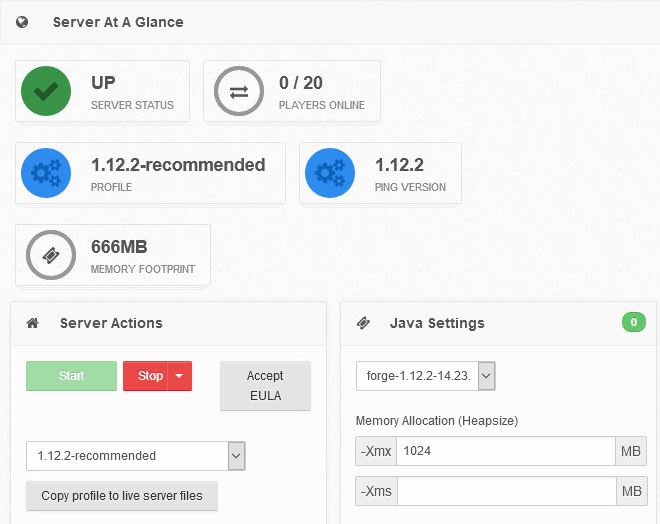 Just wanted to add to this thread I found that saved me. I had the exact same issue where the “start” button just did nothing. I’m running MineOS on top of ubuntu 18. Same fix - had to remove java 11. I actually had both java 11 and java 8 installed at the same time. Once I ran
sudo apt remove openjdk-11-jre-headless
then rebooted for good measure, then the Start button in the web ui worked this time!

How to install oracle’s Java in Debian Stretch

If you are running Debian Stretch you probably have already Java installed, more concretely the OpenJDK version. But at times we need, or simply prefer, to work with the Oracle Java SDK. In this po…

Hi there. I’m chiming in here with the same issue, at least as far as I can tell.
I’m on TrueNAS-12.0-U2, installing from the gui in to a freeBSD 12.2 jail. I see above what’s been said about the jdk11 issues but I hesitate messing around with it since I recently had mineos running perfectly with the same configuration. Since the mineos start button isn’t responding I ssh’d in and ran ‘java -jar forge-1.16.5-36.0.43-installer.jar’ and this is what I got:

I’ve done several reinstalls and reboots, I’m at a loss. Any suggestions will be greatly appreciated by myself and about ten 14 year olds.

@nsbreaks, first and foremost I’m sorry to hear the kids are impacted by this. I was in the same boat with my server back when I was messing with this. Unfortunately mine have moved on to bigger games on Steam as such I really don’t maintain my MineOS server anymore. In fact i’ve not turned it on in over a year.

With that being said I do know that running it under FreeBSD in a jail on FreeNAS/TrueNAS is problematic. That is why I switched over to a Virtual Machine running on my FreeNAS server at the time. With FreeNAS moving to FreeBSD 12 and rebranding to TrueNAS my guess is that your getting bit by a similar bug as I was but the error to me seems to indicate that it can’t open up an X11 Display hence the error referencing no Display variable set. This makes no sense as MineOS should be headless and not require a Display at all since it’s all managed through the web portal.

The other thing that’s odd to me is when I check my jails running on my TrueNAS 12.0-U2 system I don’t see a java version available that matches what you have noted above.

It could be your running a version of openjdk that’s buggy. Did you try updating the pkgs in the jail? “pkg update” to pull the latest catalogs and then “pkg upgrade” to install an new versions. My guess is your going to get an openjdk update.

And don’t worry, as long as your in a jail this update WON’T effect the TrueNAS OS at all.

Tip: if your worried take a snapshot of the jail when it’s shutdown. If it goes bad you can always restore the snapshot.

Thanks for the support. It’s a mystery and certain seems buggy. Nothing starts in Mineos and Mineos crashes but the jail still runs. I’ve been using ssh and having some luck with some servers but others give me the headless X11 error and reference java 11.0.10. That’s just java though, not jre or jdk…? I’m not clear on java. Anyway, I have a papermc server running geyser and floodgate plugins so I’m happy enough for now.

Here’s what I see when I use the commands you suggested, incase you want to take a look:

If you SSH to your TrueNAS box and do this it will tell you if the jails are still running the older FreeBSD from the FreeNAS branch.

Look under the “RELEASE” column and see if it’s 12.2-RELEASE-P2 or not. If it’s not then you might need to upgrade the jail.

I’ve seen lots of odd things running an older version jail after I upgraded to the TrueNAS branch.

I only recently started using a nas. Truenas was available when I went searching for freenas so I started there and the only changes have been some recent Truenas updates. I’m up to date as of last night (12.0-U2.1). I haven’t tried installing mineos again since last night’s update so I’ll try that later. The jail version is 12.2-RELEASE-p4. At this point I’ve (hopefully only) temporarily abandoned mineos and I’m focusing on shell installations. Everything works except forge servers. Forge is the only one still giving me the X11 error. Last night I created a separate jail to experiment with forge alone. I used this link as a guide to install a ‘minecraft-server’ port with portsnap.


The result was a strange, lengthy series of odd programs installing one after another, including version 8 of java and the minecraft server. I found all the usual server files and directories but the result was the exact same error. The good thing that maybe I ruled out java 11 being the problem.
Anyway, I’ll keep using command line. I’m learning a lot that way. I’m not trying to operate a professional server, this is just for fun with family and friends so not having mineos is only a minor inconvenience.
iMelsom March 2, 2021, 2:36pm #13

I’d like to point out that the problems in this thread is all about modded servers. Yes, there are some problems with java versioning, but they usually crop up when Microsoft / Mojang update their java dependencies. This means that modded servers needing older java versions get problems when MineOS servers get updated to work with latest edition vanilla server.

The “headless X11 error” is due to a modded java server trying to fire off a Graphical User Interface. Unless MineOS is installed manually on top of a standard Linux version that come with a GUI, and you start the minecraft server on the MineOS server (or look into x11-forwarding in ssh) you will still get this error.

Modded servers are not made with MineOS in mind, and they are more and more starting to add GUI’s to their server for easy administration. Since MineOS fires off all minecraft server in a headless screen session, a java session trying to fire of a local GUI on a monitor will fail, since it can’t get access to a monitor.

From all the years I have been using minecraft, and MineOS, I can safely say that my rule of thumb still works: if you can create, start and run a vanilla server, your MineOS install is working. Faults, problems and errors running a modded server has so far been due to one of the following errors:

Yes. There are other problems we know of with MineOS:

Some of these are tried to work around by limiting access to resources or files (like blocking known directories containing lots of files).

longshot, but did you ever figure out what to do, literally same situation, same error codes and everything. Been trying to figure this out for like 50 hours now.