For a long time I have been using MineOS on FreeNAS and recently tried it on Unraid. FreeNAS is good but it is so far behind sometimes technologically and Unraid works well but is going to cost more than I want to pay.

So I setup a Windows 10 Pro computer with a really large storage space so that I could use a system that I know like the back of my hand and do all the things that I was doing on FreeNAS. After setting up my Plex server on the Windows 10 machine I set out to create a virtual machine with MineOS turnkey installed so I can move everything from my FreeNAS server.

So now I am at the point where I want to put the servers from FreeNAS into the Turnkey machine but I am unsure how to do that. I was thinking that I could SFTP or SSH the files inside of the Turnkey machine but then I realized that the VirtualBox VM has a way to “attach” a folder to the VM. I haven’t tried it out because I wanted to see if my idea was sound first.

Here is what I have done: 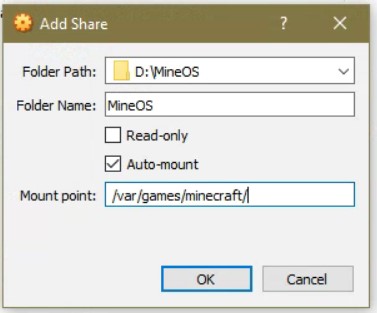 So the question is, does that look like it will work?

Is there a way to put a GUI on the debian and have the mineos as an app? I work better in a GUI. I totally get that linux users are comfortable with command lines and have millions of commands and switches and stuff in their head, but us Windows guys don’t care to remember all that crap and just know the procedures visually.

I tried putting Gnome on the install… just can’t figure out how to get that blue screen with the advanced menu choice on it as an app. Additionally it would be great if I knew how to mount that virtual machine folder using the GUI.

You can install many desktop interfaces on Linux, typically find one that you like and follow the directions for how to install; this could potentially be of use to you: -

The current web ui at this time (written in NodeJS), is now being redistributed in it’s updated form (by me), in a more beginner/user-friendly environment! You no longer need to perform a series of several extra steps just to get modern versions of Minecraft up and running, as everything at this point should pretty much just work right out of the box in this distro, just as the “official” MineOS distro had once originally initially did. Addressed issues and benefits: You no longer need to …

You can install the vBox Guest Additions, and then shared folders pretty much should just work, minus things like: -