Upgrading to Java 16 from the MineOS Turnkey ISO

Update – Server seems to be running well. Checking for java after SSH’ing to the computer shows the correct version:

I upgraded to openjdk 16, but now my servers won’t start. Any ideas?

EDIT: I managed to solve it by reinstalling MineOS Turnkey and before attempting the steps in this guide, I headed to /usr/bin and manually deleted the jar symlink (I believe it was).

If anyone else has the same problem, here is what I did:

I can’t start any of the Minecraftversions 1.17-preX or 1.17-rc1. Only versions before 1.17 works. So I searched for a solution and found this article, but something’s not working for me.
I did these steps:

However, the last command failed. I get this error message:
Failed to create symbolic link '/usr/bin/java': File exists

I googled it, and the only thing I learned is that it is like a shortcut.
I tried finding the file using FileZilla and if I try to delete it manually, it says:

Thanks in advance,
Opsi

If this is helpful at all, this is how I have mine set up for MineOS Turnkey following @TomGMiner’s guide and @ctabone’s response. Thanks you too!

(trashy formatting incoming, was formatted for discord and reposted

Pastebin.com is the number one paste tool since 2002. Pastebin is a website where you can store text online for a set period of time.

Hello, I am currently trying this for my TrueNAS jail and the line
“tar -xf openjdk-15.0.2_linux-x64_bin.tar.gz -C /opt/”
returns with
could not chdir to ‘/opt’

How can I fix this?

Here is a solution for upgrading Java for MineOS on TrueNAS (FreeNAS) Paste the following line in the MineOS Jail Shell: pkg install openjdk16-16.0.1+9.1 Make sure your server(s) are stopped. Hope this helps!

Would like to point out, if your FTP denies you permission to delete your java file in /usr/bin you can run ‘chown -R name:name /usr/bin’ in ssh (with “name” being your username).

As of June 28, Java16 comes standard in the MineOS Turnkey ISO.

These instructions have already been modified to bring you directly to Java 16.

when I used this command this happened. 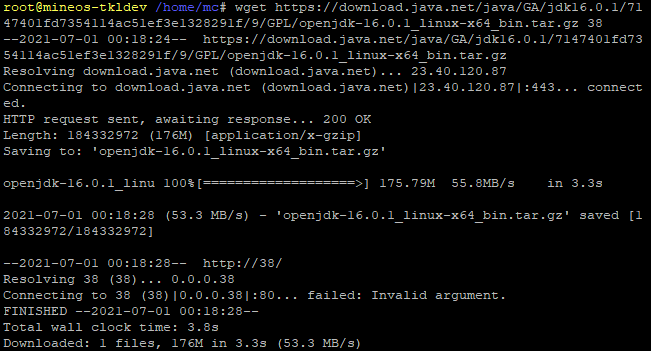 It says that something failed because of the 38 but in filezilla I see the file downloaded. Yet the next command (tar…) isnt working.

Edit: I ran the next command anyway and this seems like another unrelated problem

I’m really sorry about this 38–that is 100% a flub on the keyboard–definitely does not need to be there, in the least. That said, it still appears that the file was downloaded without issue.

You state that the next command tar doesn’t work–what was the error?

The ln -s will not work for two reasons:

The slight typo means it’s trying to put the symlink in /user/bin/, but bash was unwilling to make two new directories (/user and /user/bin`) to do it. It’s a safeguard, so what’s good is there’s nothing it did you need to undo.

The tar issue is the real concern. Let me know what the error you get there is.

I’m not sure what the error is, when I run the command nothing happens. There isn’t an error but unlike every other command, it also doesn’t have anything to say that the command worked.

I just ran the tar and In command again, this time the In didnt have an error but just like the tar command nothing showed up to confirm it worked. I tried to run a 1.17 server, it didnt work but the 1.16.5 server still does.

Okay so… after 3 hours and some help from my aunt who has a computer science degree, the 1.17 server works.

When nothing showed up to confirm that those commands worked, I think they still did work. And the only other problem that I can think of now that I had to fix was redownloading the 1.17 profile.
I had already downloaded it before I updated to Java 16, I dont know how that made the server incapable of running but when I downloaded it a second time it seemed to work.
@hexparrot thank you for your time and thank you for helping me with my problem. I appreciate all the work you do.

@hexparrot thank you for your clear, precise and simple guide. It took me a couple of minutes to update with your instructions.

For anyone having issues about servers not starting after the update. Remove all your Java arguments and your servers will start up just fine.

for me it says wget: not found

Perhaps wget is not installed.

I can’t give an explanation for why it is not, but as is the case with Linux in general, if it’s not there when you need it, you only need to add it, then continue on: