Hi, were running mine os on Debian Jessie with the web host being Apache. the host is a remote vps. The Up time 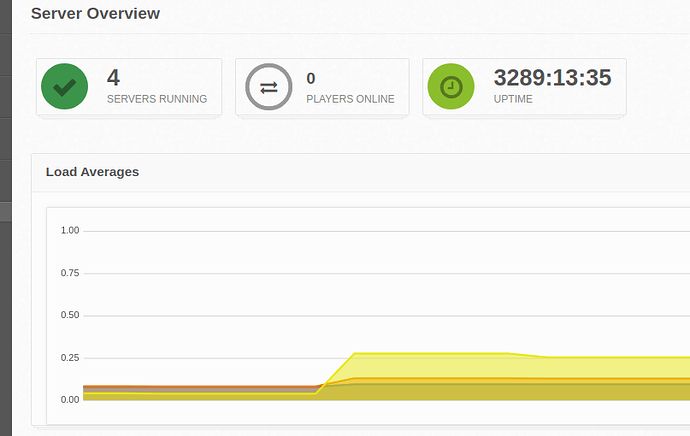 that’s just how it operates (excessively poorly) my uptime counter regularly jumps in excess of 30 seconds once it finally catches up.

it lags beyond belief, that’s just how this thing works, it took 5 minutes to update last time i started it, not exaggerating at all.

i’ve been trying for over 6 hours to select the fucking jar file with no success too.

Works fine for our network. No problems beside the counter. i would like some more features and maybe the live player counter for each server on the dashboard. what jar are you trying to select? if its spigot you need to build one first.

forge, the stupid thing is just laggy like usual, it won’t stop normally with dynmap so i have to kill it or power button then it forgets the jar file apparently.

huh weird…how are you hosting it?
like a vps or a vm or just a local box?

the host is a remote vps. The Up time

counter seams to be broken.

It’s not broken, the VPS host just simply has not been restarted/rebooted in that amount of time; the uptime counter corresponds with the VPS host system’s uptime. As for that other guy, don’t know what his problem is or was but at this point it doesn’t matter; disregard what he’s said as his statements are extremely inaccurate.

Lots of confusion may be caused by the expectation that after 24 hours, it would start showing Days.

Instead, that just reflects thousands of hours of uninterrupted uptime, which is absolutely standard for commercial VPS.

Well hey, it’s still better than having no counter at all; I would think that a VPS host would have temporary down time for updates and security patches mainly having to do with the kernel but then again I suppose not, despite the redundancy that they would typically have, I mean c’mon that’s about 4 months running straight non stop probably more, though maybe live patching is what’s in play.