There’s no errors in the mineos log when I start the Server in MineOS. It just starts then says “failed” in the notifications (but the notification does not show up in the log). Where should I be looking for helpful error messages??

Can you confirm you have installed php? Pocket mine operates on phar files, which is relatively uncommon and thus not installed by default on Turnkey (not used by even 1% of MineOS users).

I did not catch that I needed to do that, I tried copying the “pocketmine php” profile over thinking that would help but I wasn’t quite clear on if that was needed or why that option was present.

Sorry, to clarify I have now installed php5, confirmed it’s working properly (I setup a phpinfo page which is working) and retried starting the server but getting the same result when I attempt to start (no errors output and server status states “Down”.

Thanks for your help with this btw! I’ve debated on setting up a standalone pocketmine server but I just can’t get over how much I like your interface that I’d prefer to maintain it within MineOS! Will definitely be making a donation in the future!!

You know, I’ve gotten ahead of myself and completely forgotten the actual path I should have recommended. You do, indeed, need PHP5, but you needn’t install it via apt-get install php5 (this is me in normal admin mode, autoresponding).

Instead, you install the special Pocketmine-php binary profile like this: 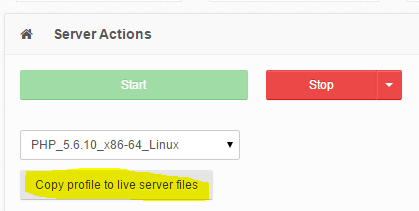 And then, it’ll work.