I feel like my machine is running into the ground. basically, I’m running MineOS on distro Ubuntu 14.04 server, and I had this issue as well back when I used the turnkey pre-built thing, wasn’t much of a fan because of the commands and security. ANYWHO I’m using an absurd amount of CPU, I have a history with mineOS on my quad-core machine and it worked… okay 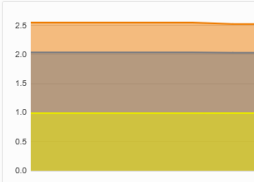 I don’t know if it is the fact I’m only running a dual-core CPU which again, had issues in the past on different machines or if its mineOS. I don’t know how to handle this, I’m not a CPU guy and have run this many in the past with little to no issue

7 Minecraft servers running off of a dual-core CPU, can’t say I would ever recommend doing something like that unless it was highly tweaked or optimized in some way (server and system) to handle it better, though even with that there’d really only be so much a dual core CPU can handle with 7 modern/current version Minecraft servers along with additional system related tasks/processes on top in the background. If your Minecraft servers aren’t complaining about “can’t keep up” and whatnot and the system itself in it’s responsiveness isn’t terrible then in my opinion it should be fine (assuming the hardware itself also is temperature-wise and all too, which if it isn’t you’d either start to see throttling/slowdowns or the system powering itself off to prevent any damage and etc.). If you are encountering “can’t keep up” messages and slowdowns/throttling and whatnot either reduce the amount of running Minecraft servers or upgrade the CPU or platform to something better, or find ways to tweak a few things or something along those lines. Even just 1 Minecraft instance is able to use that much CPU if you push it that far to (such as with/using heavy mods or tons of mods or tons of in-game RedStone or tons of players, etc.).

Yeah, your not going to be able to do 7 servers on a dual-core CPU. Just not happening.
My community dedicates an entire quad-core box to a single server.

sorry i havent replied, my motherboard in my PC died on thursday, the system hasnt shut itsself down, i switched the cpu out for a quad core i5 for the dual core i3 and its running so much better. little to no issues.